Bard of great renown. He encouraged the growing of dental floss in Montana, avoidance of pajamas, and wariness regarding matricidal guitars.

Frank Zappa is anything but self-explanatory, so we don’t need to waste any precious space on that subject. 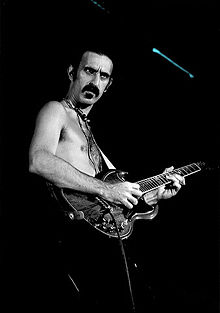 Certainly a saint (and a pope), Zappa should be considered carefully, and often, late at night when the veil between ordinary life and co-ordinary life is thinnest--you know, times when you contemplate eating a hot dog bun, even when you know you shouldn't. Zappa's only drugs were black coffee and cigarettes, yet his explorations shame all but the most strident of psychonauts: the dog reveals his conceptual continuity to be "the crux of the biscuit is the apostrophe," and the entire structure of ownership, mastership, clippership (it may have been a shaggy dog), and discipleship becomes clear. The prescience of the affirmation that a particular circular motion is destined to replace the mudshark in your mythology is, to say the least, a saintly gift, and so far we have only covered one album.

The question "does humour belong in music?" resonates in the same way that the title of the poem "Not Waving But Drowning" renders the poem itself pleonastic. Not everyone knows or cares what "pleonastic" means, but it's pretty self to ignore that sort of self-involved crap when you're listening. The Principia Discordia's position on [The Occult| occultism] is illustrated as well in Zappa's opus, as in any other work of art; the instant malaise resulting from the least attempt to categorize Zappa's music is a direct path to the void(ing of lunch).

While much Discordian music is accessible only to a select audience (few would care to listen to the Justified Ancients of Mu-Mu or to Englebert Humperdinck, despite his catchy melodies), Zappa's Varese-inspired classical compositions (vide The Yellow Shark) both educate and entertain other select audiences, the kind who listen to stuff directed by Boulez and who find an evening of shuffleboard to be a little too stimulating. Most folk can be lazy enough to choose their tunes by browsing according to genre; Zappa is one of the best at short-circuiting that impulse. In his own words:

But it don't make no Difference if they're good musicians

Because this is a stupid song

Retrieved from "https://discordia.fandom.com/wiki/Frank_Zappa?oldid=10691"
Community content is available under CC-BY-SA unless otherwise noted.