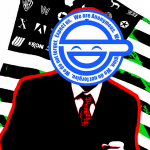 "Some Episkoposes have a one-man cabal. Some work together. Some never do explain." -Malaclypse the Younger,Principia Discordia, Page 00032

As an EPISKAPOS Gavriel 'Discordia' is free to oversee his own sect of Discordianism, launch Ops, start Wikia pages, start companies with the name Discordia as part of Project Pan-Pontification, make some of the damn finest Discordian Enamel Pins ever seen, and even print his own edition of the Principia Discordia finer than any other every seen thus far, if it grabs him to do so.

Gavriel has many Really Real Discordian fuckboy, do-nothing, haters, who are in fact, his biggest fans and buy all his cool shit.

Here are websites I Operate: Edit

Discordia Culture Shop - A Designer Toy Store. A soft sell introduction to the concepts of Discordianism in name only. Sowing disorder in the direction of Big Box Retail by producing and retailing the works of independent creatives and artists.

Populous Ephemera - A Pop Culture emporium that hosts all our in-house counter-cultural goods such as AntiFa stickers, and antique Anti-Racist poster reprints. THIS is where we sell all our actual Discordian Goods!

Psychological Industries - New Ways of Being and Thinking in the Guise of Material Products. Agit-Prop Street Stickers and more.

Retrieved from "https://discordia.fandom.com/wiki/User:GavrielDiscordiaEPIS327?oldid=11236"
Community content is available under CC-BY-SA unless otherwise noted.